Slideboards – and most certainly UltraSlide – exist because of the sport of speed skating. Legend has it that Dutch speed skaters in the late 19th century removed barn doors, coated them with wax, and slid on them to mimic the motion of their skating. Fast forward to the 1970’s and the film of American speed skating legend, Eric Heiden on his own homemade slideboard, (called a “heiden board” by many), caught the attention of performance coaches outside of the sport. Two other U.S. Olympic speed skating greats, David Cruikshank and Nathaniel Mills, trained extensively on slideboards during their careers and were instrumental in the early development and promotion of the UltraSlide.

Speed skaters, both long and short-track have spent countless hours on slideboards – usually in front of a large mirror. It allows them to not only achieve a great workout away from the rink, but also to check and perfect their straight away form. With long track ovals being few and far between – and all ice time being at a premium – the UltraSlide is the perfect go-to tool for both long and short-track skaters to stay in top fitness shape.

UltraSlide has always known that we wouldn’t exist as a product or brand without the great sport of speed skating. It’s why our logo – unchanged since day one – features the speed skater “S.” We are also proud to have our headquarters in Northbrook, Illinois, dubbed by many as “The Speed Skating Capital of the World” for all of the Olympic skaters who have come out of the local skating club – including David and Nathaniel.

When you use an UltraSlide speed skating slideboard, you can practice the exact movements of the sport without setting foot in the rink. The sliding motion perfectly mimics the sport, and a skating trainer slideboard can be placed anywhere — in a basement, a home gym, a garage, or even on a sunny back patio.

The skating trainer slideboard is perfect for strengthening all the muscles that a speed skater needs to succeed. Our speed skating slideboards also improve your cardiovascular and muscular endurance. With so many benefits to offer, an UltraSlide slideboard can be the difference between first and second place on the ice. 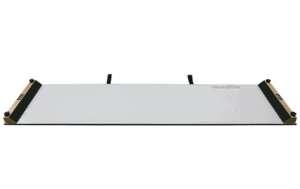